A tyrant by day, a playboy by night. That is the reputation that precedes Richard VanRyan. He lives life the way he wants, no concern for the opinion of others. He cares for no one, is completely unrepentant, and he has no desire to change his ways.

Katharine Elliott works under Richard as his PA. She despises him and his questionable ethics, but endures all the garbage he sends her way, because she needs the job. Her end goal is far more important than the daily abuse and demands she tolerates from her nasty tyrant of a boss.

Until the day, he asks her for something she never expected. A new role with a personal contract — fiancée instead of PA.

What happens when two people who loathe each other, have to live together and act as though they are madly in love?

Can the power of love really change a person?

Will they survive the contract?

I tilted my head. “I apologize. I’ll try to do better. Is there anything else you want since we’re putting everything on the table?”

She hesitated, her fingers worrying the ugly shirt she wore.

She looked everywhere but at me. “You can’t sleep with other women. I won’t be humiliated like that.”

Her cheeks were so red I thought her head would explode; however, she straightened her shoulders and looked right at me. “Yes.”

This was too fun for me.

“You expect me to remain celibate the whole time?” I asked, now incredulous.

I snorted. “I doubt it’s anything new for you.” 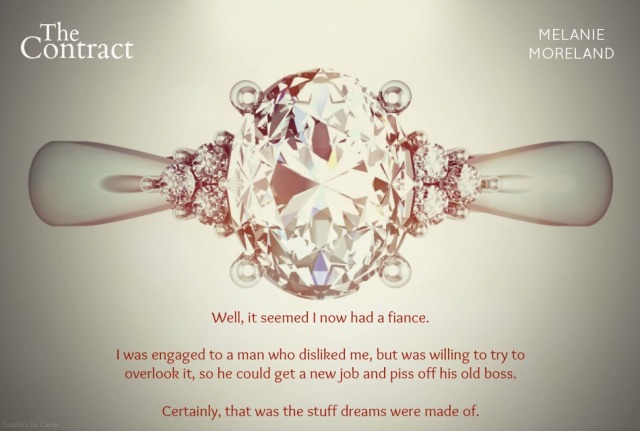 About the author:  Melanie Moreland lives a happy and content life in a quiet area of Ontario with her beloved husband of twenty-six-plus years. Nothing means more to her than her friends and family, and she cherishes every moment spent with them.

Known as the quiet one with the big laugh, Melanie works at a local university and for its football team. Her job, while demanding, is rewarding as she cheers on her team to victory.    Social Media Links:  Goodreads |  Facebook | Twitter

One thought on “Blog Tour: The Contract by Melanie Moreland”