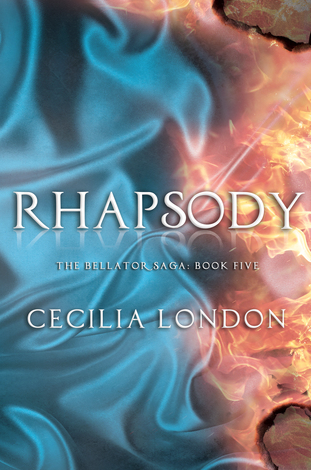 Major Caroline Gerard returns from a dangerous mission battered and bruised. Terrified to confront the emotional and physical gap between her and her husband, she’s determined to do whatever it takes to avoid reality.

Commander Jack McIntyre has been tasked with saving American democracy, but he has to save his marriage first. He’s desperate to regain the passionate connection that he and his wife once shared. And a man on a mission will sacrifice anything to succeed.

In the meantime, the rebellion is in need of a catalyst to spur international action to stop President Santos’ increasingly unstable behavior. As Caroline and Jack repair their hearts, each day brings new secrets and new challenges, and a revelation that could shatter everything they thought was true.

Rhapsody is the fifth book in The Bellator Saga. It should be read after the first four books in the series

The course of true love never did run smooth and Jack and Caroline are proving that in spades in Rhapsody. After surviving a near fatal explosion, Caroline finds herself living in close quarters with Jack and their truckload of unresolved doubts, recriminations and remorse – it’s a pretty crowded one bedroom. Jack and Caroline spend most of Rhapsody shaking off the cobwebs of the waking nightmare that has been their lives since that night in the Pennsylvania woods, and they do it together – spectacularly.

The final steps of their journey back to one another have some truly heart wrenching moments (because Cecilia London loves to stomp on her readers’ hearts – don’t let the candy fetish fool you) but, all in all, Rhapsody is joyful at its core. Don’t get me wrong, both Jack and Caroline have yet to fully shake their melancholy but they are finally using their words – and the majority of them AREN’T hurtful. We have gotten through the darkest hour and it’s a beautiful dawn. The McIntyres are back together – their love forged by adversity and stronger than ever!!!!! They aren’t the same couple from the dreams that kept Caroline together – they’re a little older, wiser, a bit gun shy, and sexy as Hell.

Ms. London is firing on all cylinders. The banter is crackling. The sex is tender, emotional and toe curling, and the developments on the Rebel front are shocking, to say the least. Ms. London has a love for these characters and this dystopian world she has created that shines through on every page, and this policy wonk/romance addict is so, so so grateful. It is the perfect blend of West Wing and Scandal – emotional, passionate, sexy, thought provoking and timely all at once.   Rhapsody is every single thing it needed to be, and the perfect set up for what promises to be a stunning finale in Triumph. Caroline and Jack are TOGETHER, finally, physically, mentally and emotionally. I can’t wait to watch them kick ass and take names.