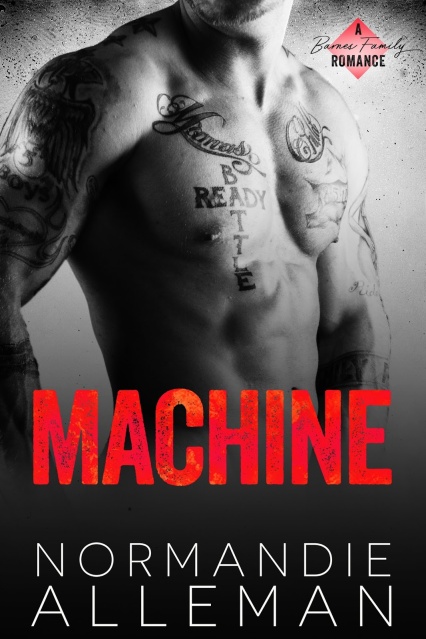 She’s trying to clean up her act.

He’ s a purveyor of filth.
It will never work.

But don’t tell them that.

She is, however, known for her heart-shaped ass and the selfies she shares with her army of social media followers. So when she meets a handsome former SEAL, she thinks she may have scored a love connection and a way to redeem her reputation with fans.

Bridger Thompson is a man of many secrets.

When an explosion in Iraq damaged his ability to satisfy his then-fiance, he never dreamed the machine he built to carry out his husbandly duties would turn into a business featuring women pleasuring themselves with it on camera. A business that could never be associated with The Barnes’ Family, the darlings of reality TV.

But Dynassy stirs a desire Bridger hasn’t felt in years, and he’s dead set on laying claim to the famous beauty—even though he fears he won’t be able to love her the way she deserves.

For that, he’d need to become a MACHINE. 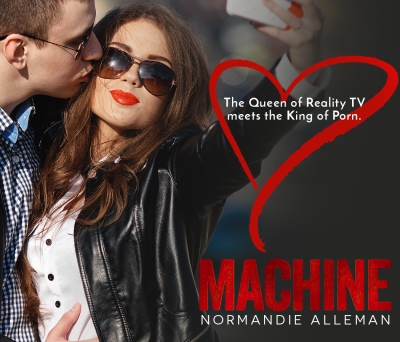 “So, I’m not a stranger?” Bridger teased.When he held me in his arms like that, the last thing he felt like was a stranger.

“No,” I managed shyly. I couldn’t believe how comfortable I was around him. He and I came from different worlds, but his embrace seemed like the safest place in the world. I suspected those big strong arms that just pulled me around the dance floor could protect me better than any man I’d ever met.

“Want to dance some more?” he asked.

We whirled across the floor, his hand on the small of my back guiding me, the muscles on the back of his neck pulsing under my fingertips. He smelled better than I would have dreamed—a combination of sandalwood and leather that spurred a sense of longing that made me imagine kissing his earlobe.

But before I could summon the courage to do it, the band stopped playing, and Bridger grabbed my hand. “Ready?”

I was ready for anything he wanted, so I said, “Sure.”

He walked me out to the parking lot and stood by an old gray pickup truck. That didn’t surprise me, but when he opened the passenger door to the eggplant-colored Dodge Viper next to it, I was caught off guard.

“I thought—” I started, but then tried to stop myself before I said something stupid, or worse, insulting.

He chuckled. “That the pickup was mine?”

I smiled, but didn’t answer.

“I get it.” Then he mumbled something about an inheritance and got behind the wheel. So, the mechanic, who’d been wounded in combat and was a SEAL no less, was also an heir of some sort. The better I got to know Bridger, the more I realized he was much more complicated than I’d originally thought.

There was a lot more to him than that deliciously curly brown hair and those piercing green eyes.
Author Bio

A former psychologist, Normandie has always been fascinated by human behavior. She loves writing quirky characters that are all too human. Fiber arts, baking, and Pinterest are a few of her favorite pastimes. A shamelessly proud basketball mom, Normandie lives on a farm with a passel of kids, an adorable husband, and a pet pig who’s crazy for Red Bull. If you’d like up to the minute new release info on Normandie’s books text RACYREADS to 24587 (Use all CAPS).
Author Links
TWITTER FACEBOOK NEWSLETTER WEBSITE
Tour Host: Give Me Books Promotions

One thought on “Excerpt: Machine by Normandie Alleman”