Fractions of seconds can do lots of damage. One decision can ruin lives. A blink can be tragic. And loving a Hollister…can hurt like hell.

They say the average person can hold their breath under water for two full minutes when pushed to the extremes. Will Hollister has been holding his for years. The oldest of two elite swimming brothers, Will was always a dominant force in the water. But in life, he preferred to let his younger brother Evan be the one to shine.

Evan got the girl, and Will…he got to bury all of the secrets. A brother’s burden, the weight of it all nearly left him to drown.

The daughter of two Olympians, my path was set the day my fingertips first touched water. My future was as crystal clear as the lane I dominated in the pool—swim hard, win big, love a Hollister.

My life with Evan burned bright. He gave me arms to come home to, and a smile that fooled the world into believing everything was perfect. But it was Will who pushed me. Will…who really knew me.

And when all of the pieces fell, it was Will who started to pick them up.

In the end, the only thing that matters are those few precious seconds—and what we decide to do while we still have them in our grasp.

She lifts her head, and I cup her face in my hands, her eyes locking on mine.
“I think I just need you to stay,” she says.
I stare at her for several seconds, holding my breath, my mind racing with
all of my demons, with everyone else’s demons, too. I fear none of it is
possible. I’m going to break her heart. Those demons—they’ll destroy her.
But I can’t give her up. I need her to stay, too. Even though I can’t
promise it; even though I shouldn’t, I say exactly what she needs to hear.
I let myself believe it for the breath it takes to speak.
“Okay,” I say, bringing her lips to mine, kissing her softly then closing
my eyes as her forehead rests against mine. “Okay,” I whisper again.
I may have to break this promise, but for right now…for right now, I mean it. 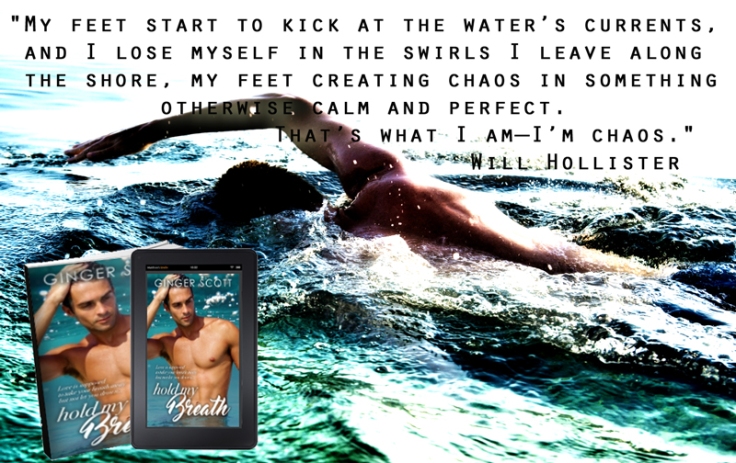 About the author: Ginger Scott is an Amazon-bestselling and Goodreads Choice Award-nominated author of several young and new adult romances.  A sucker for a good romance, Ginger’s other passion is sports, and she often blends the two in her stories.

Ginger has been writing and editing for newspapers, magazines and blogs for more than 15 years. She has told the stories of Olympians, politicians, actors, scientists, cowboys, criminals and towns. For more on her and her work, visit her website at http://www.littlemisswrite.com.