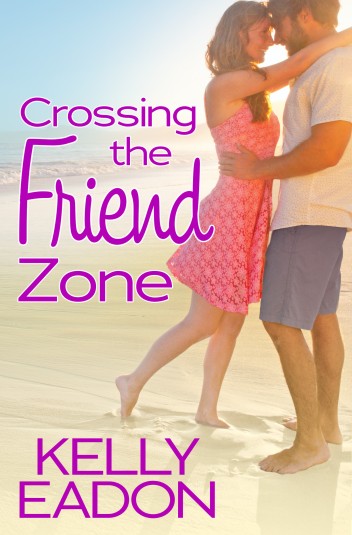 From the author of The Wedding Date and The Family Man comes the final book in Kelly Eadon’s Belmont Beach Brides series.

SHE PLANNED FOR EVERYTHING-EXCEPT HIM.

Fresh off a painful break-up, wedding planner Ainsley Slone is suffering from an acute case of “always the planner, never the bride.”  And she’s over it. It’s time for a break-to

figure out how to let everything go and just have a little sexy fun. And she knows the perfect person to teach her how: irresistible manwhore Ryan Lawhill.

Their deal? No sex, just fun. It’s the perfect plan–until the chemistry between them starts sparking like crazy. Ryan knows all too well that Ainsley’s looking for a happily-ever-after, but he’s always been keep-it-fun-or-it’s-done. Yet the moment they cross The Friend Zone, all bets are off-and soon the ultimate player is the one playing for keeps.

Kelly Eadon’s Crossing the Friend Zone is the final book in her Belmont Beach Brides series. Each book can be read as a standalone novel. The books intersect via common secondary characters. Ms. Eadon’s series is fun, fun, fun! The three stories are light-hearted and easy to read. While each leads to a HEA ending, the premise, character situations and journey in each story is unique.

Ainsley Sloan is a mess. She is a successful event planner whose life was basically laid out by her demanding parents and their social expectations. When her boyfriend takes a job overseas instead of proposing, it is a blessing in disguise. Cue Ryan Lawhill, who is committed only to staying single, to take the role of friend/escort. Ryan passes himself off as a man-child whose main goal in life is having fun, and that allows him to hide his baggage.

Fans of the series will recognize these characters from their roles in the prior books, and new readers are sure to fall in love with them. Ryan is funny and charming; even though his friends consider him a player, he really is a stand-up friend. While in the same circle of friends, Ainsley and Ryan are virtual opposites. Ryan is go-with-the-flow, and Ainsley is a detail-oriented, planner who leaves nothing to chance. Her own and her parents’ expectations have made her so high-strung that deviations from plans can push her over the edge emotionally.

Although it is obvious that Ryan’s role as last-minute event escort is going to lead to a friends to lovers relationship, every bit of the journey is entertaining. The banter between the two is great. It gives authenticity to Ainsley and Ryan’s roles as friends of different halves of various couples in their social circle. I appreciated that even though the two characters acknowledged the other as attractive, the author didn’t push them into an insta-love. Ms. Eadon set up her story with an interesting premise that gave her characters ample opportunity to get to know one another. Along the way, both Ryan and Ainsley get to know themselves better as well.

It is through that self-knowledge and growth that both characters become more likable and eventually find their happily-ever-after. Crossing the Friend Zone is a friends-to-lovers story with plenty of sweet moments, a dollop of humor, and a smidgeon of angst. A lovely read that left a smile on my face.

She strode toward him and cupped his strong jaw between her two hands. “Thank you, Ryan. Thank you for coming to get me and not judging me and not making fun of me.”She’d given him the perfect fodder, of course, by trekking up a mountain in the rain just to prove to herself she didn’t need him. It had been an attempt to convince herself she didn’t care, that his regret for the kiss hadn’t penetrated. All she’d done was prove how much she did need him after all.“It was my fault.” His voice was thick, his eyebrows knit in contrition. It was a look she’d never seen on him before: real, genuine remorse.

“No.” It would be unfair to let him take the blame for this. “It was my decision, and it was a bad one. I don’t want to think about it anymore though. You and I? We need to learn to let the past go.”

There had to be a way forward for them. They couldn’t go back and change things, but they could learn to make better decisions in the future. She was willing to try to change, for Ryan. Hell, she had changed for him, hadn’t she? Old Ainsley would never have gone hiking in the rain. Much as she was loath to admit it, he’d gotten to her core.

She closed her eyes and inhaled the spicy scent of him, then closed the distance. This time she would be the one to kiss him. It would be an affirmation of the other night at the concert. She’d make him understand that it wasn’t a mistake. Nothing that had happened between them so far had been a mistake, there had been a purpose behind all of it. To her relief, his lips met hers hungrily and her grip around his neck tightened. She kissed him hard, their tongues tangling together.

She nearly sagged with relief. As he kissed her back, she could almost feel his walls and his reserve, his sarcasm and his jokes, melting between them. He was opening up to her, showing her parts of himself he normally kept closed off.

He let out a low growl, then pulled back to stare at her. Her heart pounded in her ears as she met his gaze. There was a vulnerability there she’d never seen before. She almost smiled. Griffin was right, she’d had a thing or two to teach Ryan about relationships after all. It had just taken him a bit to catch on.

As if he could read her mind, as if kicking down the last of the emotional walls that divided them, he lifted her, cupping her butt in his hands. She wrapped her legs around his waist as he tilted his head toward her and kissed her again. This time his tongue stroked hers, massaging and caressing.

A shiver ran through her and she moaned into his mouth. It was a shiver of desire, of expectation. The cold and the wet had melted completely away, as if kissing Ryan had cocooned her in a protective bubble. She didn’t care about anything other than him and the fact that they were suspended in this moment together. It was real. He was real. And, for the first time, she was pretty sure they were real together.

He pressed her against the van and his mouth trailed down to her throat. Her head fell backward and sensation throbbed inside of her as he found the hollow of her throat. He sucked gently, sending a tsunami of need through her body. For the first time she was sure that he saw her, all of her. They’d let go of their pride and ego to be in this moment together.

She eased away from his mouth and held his gaze. He looked at her longingly and gave a small, crinkled smile. It was more boyish, more filled with hope than she’d ever seen him.

Suddenly she was filled with resolve. They should get out of here. Go somewhere more…private. Comfortable. Because she knew exactly what they both wanted to come next.

Impulsively, she reached out and placed her thumb on his bottom lip. “You have a great mouth.”

He used his teeth to graze her thumb.

She gasped, her hips arching against him. He lowered his head, burying it in her neck. He nipped and licked at her neck, creating shocks of pleasure pain. After the past twenty four hours, the certainty in his touch meant more than words could.

“You smell amazing. And you have the softest skin,” he murmured.

Not that she minded those words. “I…um.” She swallowed hard. “It’s a special lotion.”

He pulled his head back and grinned at her. “Oh yeah? Let me guess, from Paris. Or handmade by oompah-loompahs.”

She slanted him a look. “I like you so much more when you’re not talking. I can think of much better things you could be doing with your mouth.”

ABOUT THE AUTHOR: Kelly Eadon is a romance writer living in Richmond, Virginia with her husband and a house full of rescue animals, aka “the kraken”. She swears like a sailor and says whatever pops into her head. In order to counteract her big mouth, she wears high heels whenever possible. In her spare time she spins, kick boxes and attempts to renovate her farmhouse. She hates sanding drywall, loves to cook, drinks lots of wine, gets scary competitive at trivia, and enjoys time spent exploring with her rescued beagle mixes.  Connect with Kelly:  Website | Facebook | Twitter | Instagram | Goodreads