I look her body up and down as I circle her.

I smile a devious, deviant, I’m gonna make you sorry you ever started playing this game with me smile.

And then I take her hand.

I lead her to the elevator.

We go up to my apartment.

I tie her wrists together with rope.

Raise her arms above her head.

And chain her to the ceiling. 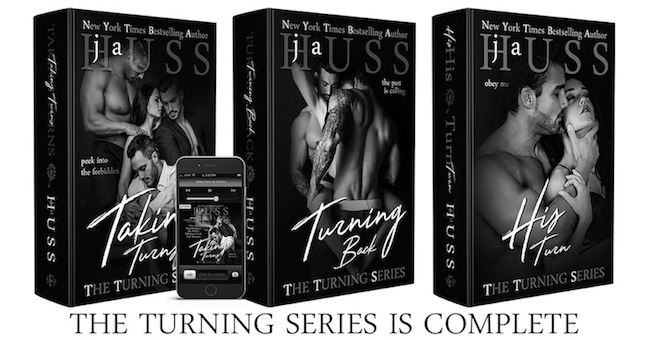 Get the complete series on Amazon!

Taking Turns is now on AUDIO!

In characteristic style, author J.A. Huss delivers a highly combustible, dramatic big finish to her Turning Series with Elias Bricman’s story, His Turn. Throughout the series, Elias (Bric) Bricman has been the dark horse in the game he plays with his best friends, Quin and Smith, but in His Turn, we get a whole new picture of this complicated man.

There is a reason Elias prizes his privacy. It is the same reason he is controlling, distant, aloof, and dangerous. It is also the same reason he hides behind that aloofness. Elias is vulnerable, and his inner doubts multiple as he seemingly loses everything when Smith, Quin, Chella, Rochelle and his little pumpkin, Adley, leave the game. They move on to normal, adult lives. Bric’s desperate loneliness and emptiness shattered me. His longing for Quin and Adley is so desperately sad. He is being pulled under by a whirlpool of self-pity and sorrow. He’ll go under, drown even, if not thrown a life preserver.

With Bric’s friends out of the picture, Jordan, tries to pull Bric into his game by offering Nadia, a beautiful, stubborn, ballerina. She and Jordan seem to be a fantastic couple, so Jordan’s insistence that Bric join them in a game, is odd. I didn’t warm up to Jordan in the prior books, and I never understood his role in the story. He is like a “wannabe”; he desperately wants to be in the inner circle with the kings of the playground. In his sadness, Bric acquiesces to Jordan’s charms, and that made me fear for Bric’s livelihood. Even after the explanation of Jordan’s behavior, I question his motivation.

His Turn is a smolderingly sexy game of chess. With each move, one of the players calls check, but who will ultimately call checkmate? What is the prize? For readers of this series, the prize is another fantastically moving story of yearning, family and friendship. Each book brings deeper understanding of and emotions for the characters involved. Heartbreaking, soul baring, and ultimately hopeful, The Turning Series and especially His Turn dragged me through the ringer and left me spent and satisfied.

I spend the whole day stewing about Nadia and her covert attempt to take back control. I have gone through every emotion. Anger came first. Bitch. Why is she even playing if it’s just gonna be a mind fuck?

But then I got to thinking about that. The mind fuck part. Because I’m kind of an excellent mind-f@#ker. I mean, $hit. I went to school to be a psychiatrist. I got pretty far into it before I dropped out. I have a medical degree. I run a sex club. I’ve been playing this goddamned game for more than a decade. And even though I’ve been on a losing streak for a while now, I’m damn good. I’m due for a win. I will win this.

The key to a proper mind f@#k is the element of surprise. The target thinks they’re ready for the unexpected, until they’re not.

Nadia was probably pretty pleased with herself last night. She probably ended that call with a huge smile on her face. One hundred percent satisfied.

When I realized that… well, that’s when I calmed down and started piecing together a psychological profile on her.

She’s so stupidly simple to figure out, I almost feel sad that she’s not more of a challenge.

I decide the ballerina aspect is my best first move. They are a different sort of person, so most of what I just described probably stems from her choice of occupation. She likes control because she’s forced herself to be in control of things to get where she is in her art.

They have to conform in many ways. Deviation from the standard is unacceptable, even though they are expected to excel and stand out.

It’s a trifecta of psychological disorders waiting to happen.

I’ve got you, Nadia Wolfe. I have your ticket, darling. I know what drives you now. 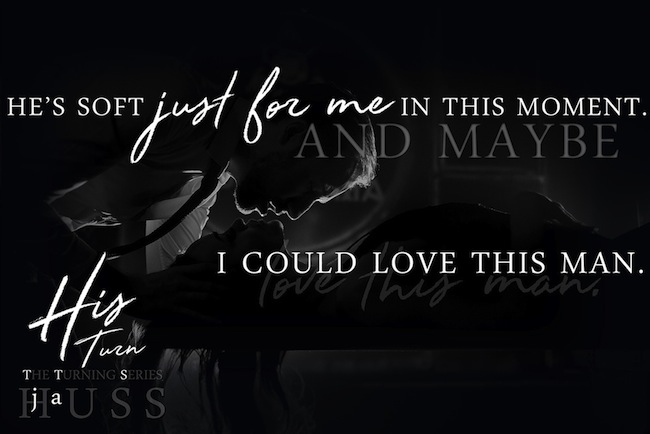 About the author:  JA Huss is the USA Today bestselling author of more than twenty romances. She likes stories about family, loyalty, and extraordinary characters who struggle with basic human emotions while dealing with bigger than life problems. JA loves writing heroes who make you swoon, heroines who makes you jealous, and the perfect Happily Ever After ending.