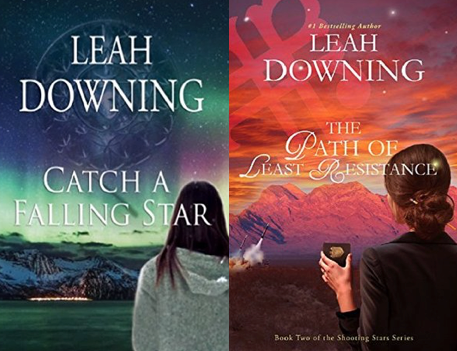 Scandal, mystery, and Hollywood’s dashing leading man refuse to let her fade from the public’s eye. Her relationship status? It’s complicated…and that’s not even the half of it!

The Path of Least Resistance (Shooting Stars Series Book 2):  The deadly actions set in motion by Collin St. Germain during the Gulf War created a catastrophic chain of events, resulting in an IED triggered homeland terrorist attack over a decade later. In 2008, Fort Bliss was targeted by one of its own: Army Captain Burak Yilmaz. When it’s discovered that Collin’s wife has close ties to the Captain, she is thrust into the spotlight of a national investigation that leaves her scorned by the nation. Now, the time has come for her to confess what happened-what really happened with her marriage, her trial, and Captain Yilmaz-to the new love of her life before the couple embarks on a perilous mission to Africa. But, when movie star James Bayer learns the truth about what haunts Lauren St. Germain, will he still want her in his life?

New author Leah Biermann-Downing started her writing career with a duet series titled The Shooting Stars Series.  Book one, Catch a Falling Star was published March 2016, and the second book was published February 2017.

The two-book series has a lot going on. In the first book the main character, Lauren, is introduced.  She fell in love with a man named Collin, who encouraged her to go to college and become a Federal Investigator. However, once she finally begins her career, she makes a terrible mistake that allows terrorists to succeed, ultimately killing her husband and fulfilling a “curse” on his family.

The series has many interesting elements—each of which would make a good story premise. The heroine was understandable, if not empathetic.  Her government career and connection to the Taliban meant that the stakes were high, so her questionable decisions were incomprehensible for an innocent, intelligent woman. The curse on Collin’s family seemed like a contrived magical/paranormal element in an otherwise very reality-based, gritty story.

Lauren’s involvement with a yoga retreat is interesting and her character development of the teachers and one of her guardians is colorful, but I never saw how her interest in yoga was connected to the political/military espionage description of the book.  Further, Lauren seemed like she was much too complicated a person to get involved with the shallow movie star, James.   Their relationship was a bit unbelievable and quite unsatisfying in terms of a romance story line. James and Lauren traveling to Alaska and becoming involved in an unexpected adventure featuring Native American folklore, sled dogs, and ghosts was again  interesting, however, the spiritual component in this portion was not fully explained and left me confused as to how it fit into the overall story arc.

Ms. Downing has created some interesting characters, and she clearly has a creative streak.  However, her first series did not work for me.  There were too many unanswered questions about the characters backstories. The chapters seemed disjointed at times, like a series of anecdotes rather than various storylines that were merging together as the tale progressed.  Overall I enjoyed the elements of the story, but I didn’t think the threads were pulled together into a tightly woven story.  While I wouldn’t recommend this first series, I will be following Ms. Downing’s work in the future.