When his girlfriend joins the army; Theodore Sway is left to raise their daughter on his own. His shitty job barely covers the ever-rising cost of his San Francisco neighborhood. When Lulu is accepted at a hipster private school, Theo is forced to find a better job. He does what any good parent would – he becomes a stripper.

Theo sacrifices his ego, his morals, and his body hair so his daughter can have the kind of childhood he’s always dreamt about. With the encouragement of his not-so-helpful club brothers and Sylvie, his ex-stripper BFF, Sway struggles to maintain balance between his sexy stage persona and his role as the world’s okayest dad. 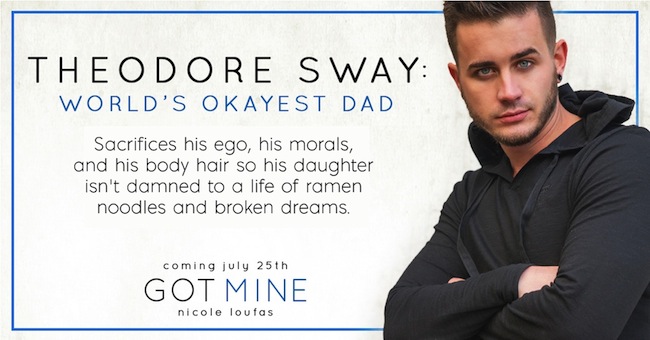 Most of my parenting skills were derived from animated sitcoms and Adam Sandler movies. My father rarely made a special appearance in my life, so guys like Homer Simpson and Peter Griffin were my mentors. I’ve never strangled my daughter or attempted to run her over with a car, and yet, I’d still take second place to Homer for father of the year.

Because one: I can’t afford a car.

And two: I don’t have a killer job in a nuclear facility that probably offers an excellent benefits package.

Fatherhood has been a learn-as-you-go experience for me. I can’t tell you how many times I wrapped my daughter in a t-shirt and plastic bag because I forgot to buy diapers. Or fed her fish-shaped crackers and apple juice for dinner. And maybe, just maybe, Lulu’s first word was shit.

Could’ve been sit or spit.

If there is one thing television has taught me; it’s this:

Whether it’s giving up on your dream to play professional baseball or shaving all your body hair, good dads provide a better life for the people they love. Believe it or not, there are men in this world who put their children first. I’ve never actually met one of these unicorns, but I’m pretty sure they exist. If things work out with my new job; I’ll be shitting rainbows by the end of the month.

I turn off the shower, pull a towel from the silver bar on the wall, and perform a sniff test. I try to hit the laundry mat once a week, but when you have to decide between clean towels and eating; a case of ramen noodles wins every time.

The struggle is real; but it won’t last forever. One day I’ll have so many fresh fucking towels I’ll need a closet to hold them all.

Clean towels are even better.

Nicole was born and raised in California. She claims to be a San Francisco native, however she’s lived in both Northern and Southern California. She credits her creativity to the fact that she attended 12 schools between kindergarten and her senior year in high school. Her nomadic childhood allowed her to reinvent herself often. Some might say she was a liar. While others see the stories she told as a coping mechanism. Twelve schools, in six cities, in twelve years – give her a break. Today she channels her storytelling ability into writing novels. Long story short – kids that lie become writers.

One thought on “Excerpt: Got Mine by Nicole Loufas”