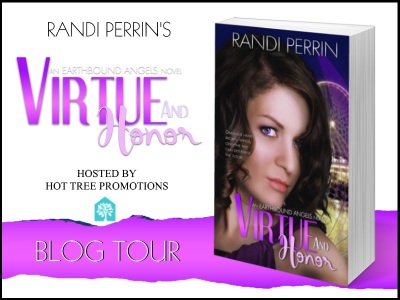 Angela Waters juggles two high-stress jobs: nurse and earthbound angel. On a rare girls’ night out, she intervenes and saves the life of Mason Kearney, a stripper with southern charm and a secret. It’s a move that will force her to contemplate why in all the heavens she puts up with the injustice of being an angel, which leads to a bombshell that challenges everything she’s ever known.

In the midst of falling for the Alabama boy, she’s in for the fight of her life when a demon, hell-bent on taking her wings, shows up at the most inopportune times.

With a family of angels rallying behind her, she’s sent on a mission to learn everything about them, herself, and evil, to save all the earthbounds from an untimely demise.

Can Angela survive with her heart and her wings intact?

Angela cringed as the stripper—egged on by a twenty from her best friend, Harper—moved even closer. He was just a breath away, gyrating his hips in time with the heavy bass beat blasting from the speakers in the hazy room.
He was attractive, she’d give him that, with his washboard abs covered in stripper grease and his square jaw covered in light stubble. His shoulders were broad and his smile projected warmth. But she had no clue how to act with a cute guy grinding his heart out, his crotch—covered by a thin layer of sparkly purple fabric—almost dead even with her nose. She had been hypnotized by the guy since the moment she laid eyes on him, a pull that kept her from looking away, which was the only reason why she didn’t make Harper do an about face and walk them back out the door when they got there. When Harper suggested a “girl’s night out,” she had no idea it would culminate in ogling well-oiled men and shoving bills down their contour-hugging briefs. Even if it did include the brown-haired Adonis scantily clad in purple who was shaking what his momma gave him as he prowled around for money.
Angela gave him a tiny smile before she leaned back against the hard chair and winced. For a place that relied on customers staying for long periods of time, the seats were not comfortable.
Harper pulled a few more bills out of her wallet and winked at her. “Enjoying the scenery? I can get him back over here.” She thumbed through the wad of ones and fives with a smile.
“I can’t believe you brought me to a place like this,” Angela said, reaching for the glass in front of her, which contained the remnants of a virgin tequila sunrise… so, just a sunrise.
“I can’t believe you’ve never been to a place like this. You are straight, aren’t you?”
Angela rolled her eyes. Harper knew her preferences. In fact, Angela had been in lust with Harper’s younger brother for most of high school, finally hooking up with him during their senior year. However, he had been ripped from everyone too soon. She’d been on a few dates since then, but no one had lived up to Bryce. Angela didn’t have time for a relationship anyway, what with pulling twelve-hour shifts at work.
“Come on, it’s been three years since we lost Bryce,” Harper said, sadness clouding her eyes for a split second before returning to glee with the sights that surrounded her. “We’ve got to get you a good hook-up, get you laid. You’re still just as virgin as that drink in your hand. Speaking of the drink, we should fix that as well.”
SERIES SALE
99 cents