Not everyone needs a master.

Not everyone needs to really live, either.

Some people are content to be a participant in the game of life.

Others want to play for real.

If you want to play for real, come to me, lovely.

I’ll give you that little push you need.

I’ll open your mind, and your world, and soul.

Lay you bare. Let you feel the heat of my stare.

Take you places you’ve never been before.

Your body is my chessboard, sweets.

And if you give in to me, and you play, you might even win.

It’s just… your prize might not be what you went looking for.

For audiences 18 years and older

No matter how many JA Huss books I read, she is always able to surprise me in her stories.  Her talented story telling and quick wit draw me in every time.  Total Exposure is the first book in a series of standalone stories, and although it is a bit unique for Ms. Huss, the layered webbing within this story is sure to catch and hold every reader.
The suspense and mystery are not about a crime or evil doings per se, but about what happened in Ixion and Evangeline’s past to turn them into reclusive introverts.  Total Exposure is a slow unraveling of frightened, damaged individuals in order to “totally expose” the dagger in their hearts.  Instead of bleeding out when that dagger is metaphorically pulled out, Evangeline and Ixion inadvertently become each other’s tourniquet—effectively staunching the flow of their raw emotions and giving each a second chance at life and love.
Meet the players:
Jordan Wells is a lawyer, a player, and perhaps a twisted manipulator or sympathetic genius.  At the end of the story, I was still pondering how I would classify this character.
Ixion’s persona of a bad boy who doesn’t care is really deflection. He pushes people away before he has the chance to be rejected.  But, you have to wonder who could reject those cool, ocean–blue eyes. Ixion avoids dealing with his past until Evangeline forces him to tell her why he would take this job.  Well, she doesn’t physically force him, but his empathy for her compels him to do so in order to help her.
Evangeline was a child prodigy, and her parents paraded her around like a performing monkey.  Likethe owners of s performing pet, her parents took the glory and spent all the money, leaving her not only loveless but penniless.Ixion and Evangeline’s relationship is unusual and not meant to be romantic—or perhaps that was Jordan’s plan all along—but their forbidden interaction leads to finding a kindred spirit.  They see and they are seen.  They provide one another with a safe and anonymous way of pouring out their troubles, and low and behold they find healing. In the end, it is not clear who is saved and who is the rescuer.
The set up is a bit slower than normal for Ms. Huss, but once she has introduced her characters and set the scene, the intensity ramps up quickly.  Written primarily from the point of view of Evangeline and Ixion, this compelling novella takes place over the period of about one week.  In Total Exposure, Ms. Huss takes mind-games to another level.  She has raised the bar on gamesmanship both in her writing and for her characters. 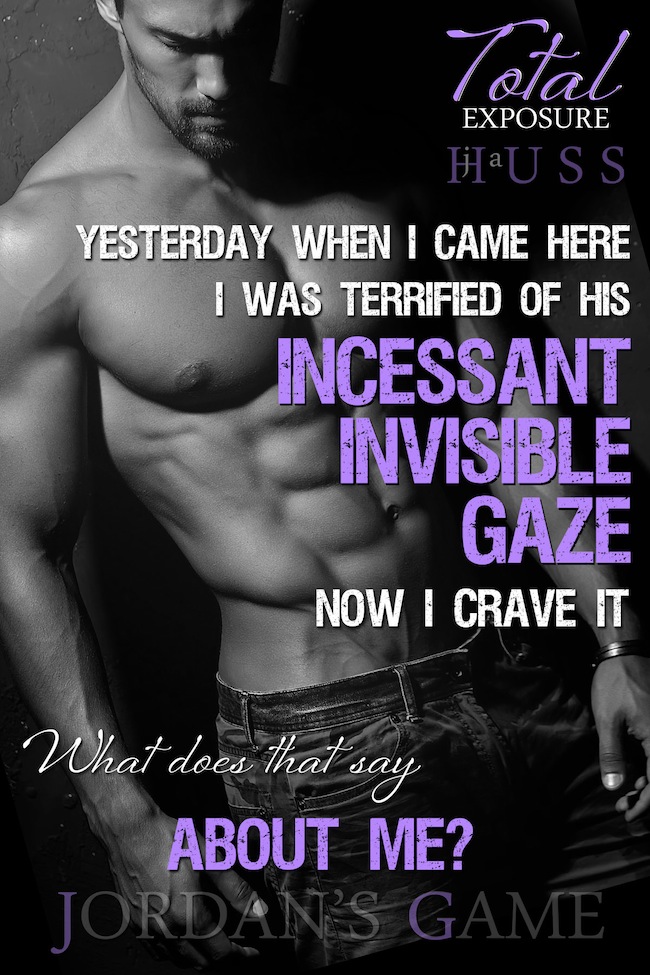 About the author:  JA Huss is the USA Today bestselling author of more than twenty romances. She likes stories about family, loyalty, and extraordinary characters who struggle with basic human emotions while dealing with bigger than life problems. JA loves writing heroes who make you swoon, heroines who makes you jealous, and the perfect Happily Ever After ending.

2 thoughts on “Review and Giveaway: Total Exposure by J.A. Huss”