They were never meant to be just two. It was always three. But seven years ago Jordan Wells broke the trust he’d built with Alexander and Augustine and everything changed.

Everyone moved on and got over it. Put the past behind them where it belonged and started new lives.

And they won’t take no for an answer.

Jordan Wells is about to play his final game.

Will he win? Or will he be too afraid to try?

BOOKS IN THIS SERIES: Total Exposure, The Pleasure of Panic, The Boyfriend Experience, Play Dirty – ALL STANDALONE BOOKS. 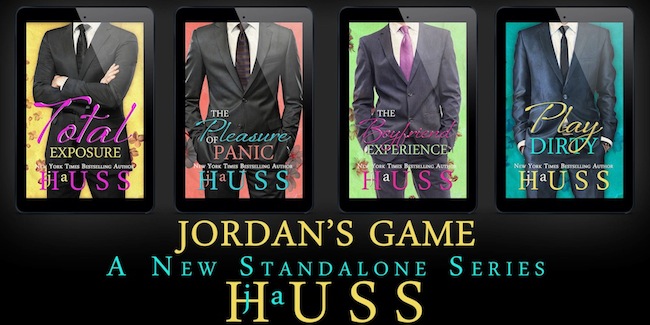 Play Dirty is the fourth and final book in J.A. Huss’ Jordan’s Game series. All of Jordan’s games have had incredible twists and turns, but Play Dirty is one hairpin turn after another!

With every twist, the game master seemed to change. I was never sure who was pulling the strings and setting up the game. I should have seen it coming though, because Ms. Huss doesn’t have throw away characters.

Each book in the series is a standalone novel, however, Play Dirty does have cameo appearances from a few key players in this series. Play Dirty is an exhilarating ride that includes both mental mayhem and closure for Jordan Wells and his friends.

About the Author: JA Huss is the New York Times Bestselling author of 321 and has been on the USA Today Bestseller’s list 21 times in the past four years. She writes characters with heart, plots with twists, and perfect endings.

She lives on a ranch in Central Colorado with her family.