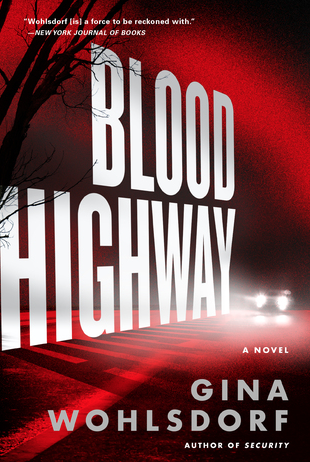 A gripping, surprising, and sexy thriller with a big, pounding heart, Blood Highway takes a seventeen-year-old girl on a brutal journey into adulthood on a road trip that threatens to kill her before she reaches the end.

Rainy Cain, a tough, troubled high school senior, desperately wants to escape the confines of her life in Minneapolis. When her increasingly unstable mother suddenly commits suicide, Rainy thinks she has found her chance. Instead, her father, Sam—who she had always believed died before she was born—escapes from prison and abducts her, taking her on a cross-country trek in pursuit of millions of dollars that he believes her mother had kept from a botched robbery years earlier. On their heels the whole way is a young Minneapolis detective intent on bringing Rainy safely home. It is an odyssey that will test Rainy’s considerable instincts about sanity and madness, and keep readers turning pages till the twisty end.

Blood Highway abruptly starts with the main character dying her hair in a bus station restroom.  It is a deep plunge into the character of Rainy Cain, and without preamble (or justification later), it felt harsh. It didn’t intrigue me like the tense, thriller hook it was meant to be.

Seventeen-year-old Rainy (AKA Kat) is as street smart as a spymaster.  How she picked up her “Artful Dodger” skills is not revealed, but her survival skills are required as her mental ill mother is raising her and her father is imprisoned.  The protagonist is willful and has pluck; the author gives this character crass and brash language and behaviors to depict not her commonness as much as her lack of a good family and upbringing.

In this grisly, dark read, a young detective, who also lost his mother to suicide at a young age, befriends Rainy.  Naturally, the detective, Blaine, doesn’t follow protocol and turn her over to CPS; this leaves her susceptible to her escaped father’s evil plans.  Rainy is taken on a far-fetched journey by her kidnapper-father and his sidekicks.  The trail of violence that ensues begets the book title.  The unlikely relationship that Rainy develops with one of her “captors” as well as her freedom to contact Blaine while being held against her will was too implausible.

I was in the mood for a “gripping sexy thriller”, so I had high hopes for Blood Highway.  The premise hooked me, and it is action-packed, but the story didn’t satisfy me.