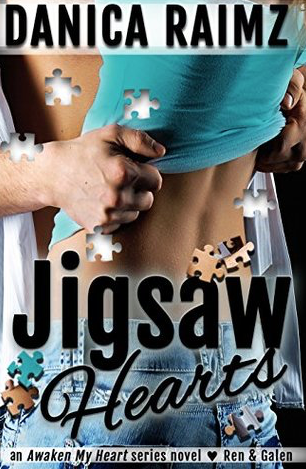 Between the two, there were many missing pieces. It would take a selfless
and fiery sort of love to fill them in.

To overcome her sensitive nature, successful entertainment journalist Ren Hayden locks away her emotions along with the scattered pieces of her tragic childhood. The only person she trusts, but probably shouldn’t, is a criminal—her brother, Seth.
When Seth dies unexpectedly, he sets off a chain reaction causing Ren’s coping
mechanisms to falter. Unable to make sense of messages she receives from beyond the grave, she can’t stop herself from finding comfort in the arms of Galen Zabriese—the brother of the woman Seth ruthlessly conned. Ren discovers life’s missing pieces in Galen and steamy experiences in his bed but struggles to feel worthy of his love. While battling his own missing pieces, Galen becomes hell-bent on drawing Ren’s real nature to the surface. Can selfless, true love help them complete each other or will Seth’s past catch up with them first?
Jigsaw Hearts is a stand-alone novel full of emotional depth and steamy romance.
Ren and Galen continue the beginning of their life together in two follow-up
novellas, Pieces of You, Pieces of Me and Whole Piece of My Heart. Look forward
to more novels and novellas involving the unconventional, flawed, but fabulous
Zabriese family throughout the Awaken My Heart series.
Amazon | B&N | Scribd | Plaster | Goodreads

Copyright 2016 Danica Raimz
Avocado trotted into the kitchen as effectively as a hulking blob of fur could.
“So you buy into all of it? Natural remedies?”
“A lot of it—not all. I just don’t preach it. Hey … watch out for the—”
In one swoop, Galen’s arm swung around my waist just as I fell backward.
“Jory!” Galen yelled and tugged me upright. I fell against him. “How many times do you have to be told to take Avoca-do’s leash off in the house?”
Was he aware that as his gaze was turned toward the living area, waiting for Jory to make an appearance, he still had me in one arm, pulled close?
My heart raced against his. Instinct told me to pull away, but I wasn’t sure if that would seem more awkward. As silly as it sounds, I didn’t want to call attention to myself.
“Jor?”
When Jory didn’t answer, Galen turned to me as if remembering I was there.
“Uh … you okay?”
Smart ass mode completely off line, I simply nodded, then got lost in the shape of his eyes, their amber-green. At least that’s how they looked in the kitchen light; they had been darker outside on the patio. Either way, they were fascinating, like most things about Galen, whether I wanted to dwell on them or not. Enough time went by that releasing me would be awkward no matter what.
“Dammit, Ren,” Galen whispered, then abruptly let go. Before I could regain my balance, his palm flew to my jaw to pull my face close. Soft, full lips landed on mine to rest in stillness, spawning a sweet desire I had never known. It heated every inch of space between us and made my pulse pound in my ears like a hammer in an emergency. When Galen did pull away, I took a breath and waited for my manic libido to take charge and fling the man onto the kitchen counter to have its way with him. But it didn’t. At least not in the way I expected. Instead, I wanted the awkward stillness of those last seconds back. I wanted the sweet, gentle taste of Galen back on my lips. He retreated a step, reached for my hand, then pulled me to him with one tug. We landed against a broom closet as
he captured my lips with his once more. This time, he was anything but gentle, and our mouths suctioned together, wide and frantic, over and over, much like the residents of his koi pond. We became locked in a desperate desire to taste each other as fully as possible. Galen’s hands slid up and down the length of my back while mine found their way into the hair I had wanted to touch since Beachy Head. The closet door behind us kept banging rhythmically with the motion of our bodies shifting against each other. When Galen’s soft, warm tongue sought mine, I gave him exactly what he needed
simply because I … wanted to. Nothing more occurred to me for the longest time, because ecstasy came bottled in this simple act.
“Gale?” came Jory’s little voice in the distance. “Whadda ya want?”
I pulled away, but Galen held onto my waist, staring into my eyes as if he had no clue how I had gotten there. Tentatively, he reached out to gloss a thumb over my wet lips. The sweetness of his touch set off a crackling spark that walloped me into reality. What were we doing? I would have to ruin it. Cheapen it. Wreck it. His sweetness was not good for me, not good for–
I took hold of his thumb, ran my tongue over the tip, then kissed it softly, erotically.

But Galen’s eyes only widened with desire, and he moved to take my lips with his once more. And damn it, I didn’t know what was wrong with me, but how I wanted him to! Only Jory’s feet drummed through the living room, so I jumped aside just as he burst into the kitchen.

“Gale? You called me?”
Galen blinked. “Yeah, bud. Um … I wanted to remind you about … uh—”
“Avocado’s leash,” I gave him.
“Yeah. Ren almost broke her neck as he ran through here.”
Jory looked genuinely remorseful. “Sorry, Ren. Really.”
I patted the kid on the head. “Don’t worry about it. I’m okay … fine … just great.”
“And Avocado is sorry, too.”
“We’re good, Avocado!” I called to the mop with a nervous laugh.
“Jory, why don’t you ask Moms if she wants the bread cut yet. Guests will be here any moment,” Galen suggested.
The boy saluted and headed for the patio. I turned back toward the first man to make me utterly flummoxed with a kiss. He still looked shocked, as if he had nothing to do with our lips meeting.
“Well, that was unexpected,” he whispered.
Before I could breathe a word, Katherine popped in from the outside. “Heather’s here! Come, Ren. Let’s introduce you. Galen, please bring the chili.”
Katherine’s feast presented as a mashup of the Mad Hatter’s Tea Party and a photo shoot for some vegetarian foodie magazine. The conversations, however, had me overwhelmed by topics I knew little about. That said, I enjoyed myself when I wasn’t floored over Katherine’s tales of holistic cures, samples of Heather’s photography talents
mixed with supposed psychic revelations about her subjects, the experiences of Olive and Marcus while traveling the Appalachian Trail in their thirties, or the simply breathtaking glances Galen would occasionally throw my way.
“A toast!” Galen’s friend, Hugh, suddenly shouted into the night. Loose dark curls glimmered under the lights, except where they were pulled into the aforementioned man bun. He wrapped an arm around his wife’s shoulders and leaned in to extend a cobalt-blue wine glass toward the rest of us.
“To Katherine for another amazing spread!”
“To Katherine,” everyone shouted.
“To Laina and Fern on their recent nuptials!”
“Oh, yes!” Corinne pumped her glass in the air. “And the most amazing of receptions.”
“They had a magic theme wedding!” Jory whispered for my benefit. Laina and Fern, beamed. “It was only that magical because of our guests!” Fern claimed, glass raised.
“To new friends named Ren!” Corinne laughed.
I nodded politely but wanted to crawl under the table.
“Yes!” Laina’s glass shot up in the air. “How wonderful to meet the sister of the man who, even if for a short time, made our Corinne so happy.”
“To Seth!” Katherine threw an arm around her already teary daughter. “May he watch over us tonight and know how much he is missed.”

My eyes shot over at Heather, the self-proclaimed psychic. I thought about jokingly asking if she sensed him. But Heather’s lips were tightly clenched in a forced smile.

“To Heather on her new business!”
Hugh added. “We’ll be needing her services soon.”
“To Heather!” we all shouted.
It took Jory to ask, “Why will you need her to take pictures?”
Silence washed over the patio.
Then, “We’re pregnant!” Jenna shouted.
You would have thought the two were British royalty the way everyone exploded in happiness and revelry. Galen pounded Hugh on the back, then hugged them both and kissed Jenna’s cheek. Katherine began yammering about ways to tell the sex of the baby. Due dates were thrown back and forth, and Jory sang some weird song about
babies. Olive began throwing advice around, and Marcus regaled us with tales of how he was the worst diaper changer in fatherly history. The overabundance of happiness became too much for me; it felt like going skydiving your first time on a plane.
Why couldn’t I just consume it all? After all, we were talking about joy. But I knew the answer: I would never reconcile these Zabriese emotions with my sadness over being here solely because of Seth. I would never live down knowing the truth about Seth in the face of Corinne’s adoration of him. It also felt weird to take part in joy when my life could be in danger over not finding a green box. Then, of course, there were the mixed emotions over having the hot man across the table kiss me like I had never been kissed before. Not that I even allowed men to kiss me often. And when I did … it never felt like that! I mean what were Galen and I supposed to do with the intensity of our kitchen tryst, anyway?
I needed a fix of something. But I didn’t dare smoke around this health-conscious crowd, especially with pregnant Jenna around. I couldn’t start scribbling out checks, either. And sex? Normally, if someone had gone after me like Galen did, I would have found a way to get him into a bedroom somewhere. But that idea seemed all wrong when applied to the guy across the table. Instead, I found myself wishing I could sit next to him; I wanted to know what it felt like for him to drape an arm over my shoulders, his fingers laced through mine. My body tensed over the thought; such romantic, mush-riddled ideas were frightening. If I didn’t pull myself together, I ran the risk of self-destruction.
Find the author:
http://www.DanicaRaimzRomance.com
https://www.facebook.com/danica.raimz.5