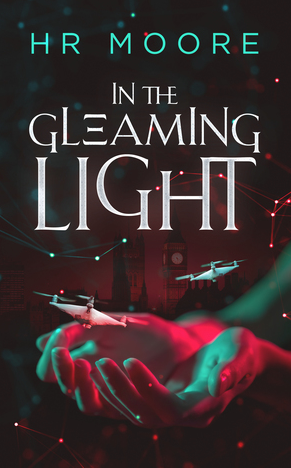 It’s 2048.  Automation has stolen vast swathes of jobs, and the government pays everyone a no-strings-attached income, enough to live on, in order to keep the economy going.  Society is split into those who can get jobs; engineers, managers, creatives, and those who cannot.

Iva Brooksbank, Senior Investigator of the Enforcement Office, has made a career of taking down corporate moguls who flout the rules, and now she has Guy Strathclyde, CEO of Cybax Technologies, firmly in her sights.  She’s sure he’s up to something, and races to find evidence that will stick, before her time runs out.

Lulu Banks, a world famous artist, uses her work to highlight the deep inequalities and injustices the world now faces, perpetuated, she thinks, by the relentless march of technology.  But when she finds herself the object of Guy’s affections, she has to decide if she can trust his intentions, or if he’s just the same as all the other corporate big dogs.

What happens when the robots steal our jobs? Speculative fiction novel “In the Gleaming Light” gives a much needed plausible imagining of the world thirty years from now.

Lulu flopped to the ground as she crossed the makeshift sprint finish line in the sand, her chest heaving as she tried to regain her breath.  It was a glorious morning, even at this early hour, the sun reflecting furiously on the flat calm of the sea, playing about as the water moved gently up and down, slivers of silver light trying to fool onlookers into believing it could be warm.  Tiny waves lapped lightly at the beach, the sound calming Lulu’s exhausted body, helping her settle her racing heart.

‘Darling, you’re a little distracted this morning,’ said Bertie Baqua, her slight, Asian fitness instructor, as he caught up with her.  He was renowned the world over and in great demand, but he and Lulu had been friends for years, Lulu having attended his classes before he was famous, their friendship secured on the dance floor of a dubious Salsa club in Brighton.

‘I opened my exhibition last night,’ she replied, as though this were enough.

‘And?’ he replied, clearly requiring more.

She thought about keeping Guy a secret, but knowing Bertie, he probably already knew. ‘And Guy Strathclyde came.’

‘Did he indeed?’ flounced Bertie, laughing with his eyes.

‘He keeps asking me out,’ she shrugged, as though this were obviously a problem.

‘And, I thought he was a typical corporate mogul.  I mean, he was obviously given his job by his dad.’

‘Which is frowned upon these days,’ said Bertie, frivolously.

‘Which is illegal these days,’ snapped Lulu, rolling over and propping herself up on her arms.

Bertie raised an eyebrow and a shoulder simultaneously.  ‘Touchy,’ he said.  ‘You must really like him.’

‘I don’t know him.  But I was surprised about his opinions on certain topics.’

‘Well, what’s the problem then?’

‘I just never thought I’d even entertain the idea of dating someone like him.  And I think he might be dangerous.’

‘Isn’t that a little prejudiced?’

Lulu rolled her eyes.  ‘Maybe,’ she pouted, playing with the grains of sand between her fingers.

‘What harm can come from going on a couple of dates?  If you like him, then great; you’re not breaking any rules by dating him…apart from ones you’ve perhaps created for yourself for no good reason.’

Lulu huffed as she brushed the sand away.  ‘I suppose so.’

‘You’re welcome,’ he said, reaching down to help her up.

‘You’re insufferable,’ she said, refusing his hand and throwing a towel at him instead. Bertie snickered, and didn’t stop. ‘What now?’ she asked, not understanding the joke.

‘Looks like you’ve got company,’ he said, nodding up the beach.

Guy reached their workout spot and held his hands up; they were full of coffee and paper bags.  ‘Hungry?’ he asked hopefully.  She paused, considering another refusal.  ‘Oh, come on,’ he said, ‘of course you’re hungry; you’ve been working out for ages.’

Bertie nudged Lulu towards Guy.  ‘I’ve got another client, so I really must be going,’ he said, as though the breakfast invitation had also been extended to him, which of course they all knew it hadn’t. ‘Have fun,’ he said, suggestively. He stuffed dumbbells, balls and elastics back into his bag, hoisted it over his shoulder, and headed back up the beach, throwing Lulu a double thumbs up, complete with accompanying indelicate head nod behind Guy’s back.

Lulu ignored him.  ‘You’ve been watching me work out?’ she asked, not sure whether to be flattered or a little bit freaked out.

Guy laughed.  ‘Not really. I’ve been working in the café up there,’ he said, pointing to the beach’s edge where a Chutney Café stood, the chain that had gained supremacy when it innovated the old players out of the market by replacing humans with robots.  ‘They’re not technically open yet, but the manager took pity on me and let me in early.’

‘Charmed by your smile, no doubt.’

‘I am very charming,’ he said, flashing her his best grin.  ‘I’m so glad you’ve noticed.’

About the Author: Harriet was born in Germany, and her family returned to the UK shortly afterwards. She lived there until she was 5, her grandfather teaching her the basics of cheating at cards and swindling chocolate, her mother starting to instil a (some would argue) unhealthy relationship with cake, and the neighbours demonstrating that some people don’t understand cherry blossom is there to be picked, mixed with mint and water and sold as perfume.

Then there was Scotland; stealthy guinea pig breeding, riding horses, advanced cards, more cake, then to Devon and school in Exeter. She loved maths in the early years, but by the time she got to A Level, Sociology was her favourite subject, opening her eyes to things she’d never before considered, namely, nobody is really right, nobody is really normal and primary socialisation has a lot to answer for.

At the age of about 12, Harriet started rowing for Exeter Rowing Club. This quickly took over her life and before too long she was clad in lycra, training 6 days a week and competing at events around the country.

After finishing her A Levels, Harriet went to university in St Andrews, studying Philosophy for two years, then switching to Management. She was particularly interested in the change elements of her course and especially the areas concerning how people create and react to change. After four very civilised years by the sea, she ventured to London, to foray into the strange world of insurance (surprisingly, more interesting than you might think).  She worked as a Project Manager on large change programmes before founding her own consultancy in 2015.

Harriet has since worked on a number of insurance related projects that helped influence and inspire In the Gleaming Light, specifically around the use of connected devices in the home, data collection and utilisation within financial services, and how automation can both reduce costs, and significantly improve vast swathes of tiresome, long-winded processes.

Harriet has recently moved from the UK to New Hampshire, with her husband Chris and two young daughters. When she isn’t writing, editing, eating, running around after her kids, or imagining how much better life would be with the addition of a springer spaniel, she occasionally finds the time to make hats.