Harper Rodrigues’ five-year plan was on track. She’d worked hard to secure her graduate marketing job, her boyfriend Adam was set to propose any day, and she was learning to process the death of her sister. She’d been through some dark times, but there was light at the end of the tunnel.

At least, that’s how it had seemed until the day she was fired in the morning and dumped by nightfall.
Now, with her life plans in ruins, Harper turns to her best friends who are going on the trip of a lifetime – five-months traveling across Asia and Oceania. Determined to see the silver lining in her unraveled plans, she decides to book a plane ticket to join them and resurrect her dreams of becoming a travel photographer.

But Harper’s travels aren’t all sunshine and cocktails. With Adam begging for her forgiveness and proposing on the eve of her departure, Harper knows she must be on her best behavior. But when she meets Xavier, an enigmatic poet on the beaches of Goa, that may just be easier said than done.

Runaways is the empowering and racy tale of one woman’s voyage of self-discovery. A must-read for fans of travelogues and romance alike. 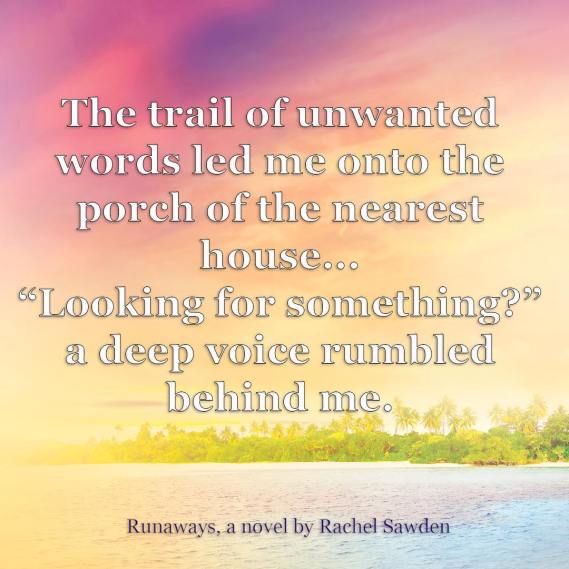 The sun beat down on me as I plodded through the sand. Two more days, I reminded myself. Only two more days. It was those words that kept me awake last night. Along with thoughts of him in that towel. And the poetry hehad written. When I read Tahitian Heatto distract myself that morning, my image of the perpetually naked love interest was replaced by him.

I couldn’t understand why I stop thinking about a guy I had just met when I loved someone else. I know it was just thoughts, and perhaps a touch of cold feet as I wasn’t exactly experienced with men. Or a little harmless curiosity because I had never met anyone like him before. But it still felt as if I were cheating on Adam. I wouldn’t stand for Adam thinking about another girl in the way I thought about Xavier. Especially on our anniversary. What was worse, my body responded to those thoughts in a way I never thought it could respond. This was one of those times that called for a talk with your big sis, someone who knew me, someone I knew wouldn’t judge me, someone whose advice I trusted. I could speak to the girls, but I know Lana would tell me to go after him and compartmentalize my feelings and Jade would get upset because she’s not quite past the pain from being cheated on.

Perhaps I should have stayed in Toronto and eaten the cost of the ticket. But I couldn’t go back in time. I had to live with my decision and get my career going. Abandoning my hopes of a monkey shot I stuck to my new plan for the day: to shoot the market, and avoid the coconut grove. I knew I’d have to see him at the silent disco, but I hoped to avoid him until then.

Passing a group of children, I took a better look at the cherubic clan huddling around a boy about seven years old who was holding a guitar in his tiny hands. I had changed the settings back to automatic and raised my camera. Focusing them in the viewfinder, a little girl in a pink sari moved. And engulfed in a deluge of giggles, clapping hands and innocent smiles, I saw him.

His eyes flicked up, and I froze. Lowering my camera, he gave me a nod of recognition.

I had to get far, far away from that nod. Breaking eye contact, I turned and made good my escape, tripping over a sleeping dog with my first step.

“Harper?” he called out.

I sped up, hoping to outrun his voice.

“Hey, stop!” I felt his hand on my arm and electricity surged through it. “Are you running from me?”

About the Author: Writer, traveler, content creator, master of random jobs, avoider of the 9-5. In 2010, Rachel Sawden set off on a trip around the world hoping to be given a sign of what to do with her life. That sign never appeared. It turned out the entire trip was the sign. When she returned to her home in Bermuda, she began to write about the countries she traveled to because she was still obsessed with them and had run out of people to listen to her drone on about her trip. She turned a life-long personal challenge of ‘write a book’ into Runaways, her debut novel. She has continued to travel, take photos, and write ever since.

Promotional materials courtesy of the author and IndieSage PR

One thought on “Excerpt and Giveaway: Runaways by Rachel Sawden”