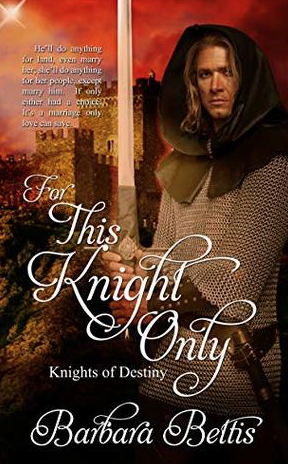 Sir Roark will do anything to gain land, even beguile an unwilling lady into marriage. He knows she’s much better off with a man to take control of her besieged castle, to say nothing of her desirable person. But it isn’t long before he discovers that, although her eyes sparkle like sunlight on sea waves, her stubbornness alone could have defeated Saladin.

Lady Alyss is determined to hold her family’s castle, protect her people, and preserve her freedom— until her brother’s dying wish binds her to a stranger. Still, she’ll allow no rugged, over-confident, appealing knight to usurp her authority, even if she must wed him. Especially since he thinks a lady’s duties begin and end with directing servants. Alyss has a few surprises for her new all-too-tempting lord.

But when a common enemy threatens everything, Roark and Alyss face a startling revelation: Without love, neither land nor freedom matters.

The story is wonderful in many ways.  It depicts a strong and confident woman who defies the expectations of women of her time and is incredibly loyal to her people.  Lady Alyss lives in 1195, a time when a woman’s duties are merely to direct the servants of the castle. But when she learns that her father and brother are both dead, she finds herself fully in charge of her castle and its people.  It then becomes her responsibility to keep her people safe from villains and other Lords who are trying to take over her land.

Along comes Sir Roark, a stranger and a knight, who, like many other Lords, is trying to deceive Lady ALyss and gain ownership of her land.  Roark manufactures a plan to trick her into marrying him by lying about her brother’s final wishes. She is unsure at first, but, faced with no other option, she acquiesces and marries him in order to keep her castle and people safe.

What Sir Roark is unaware of is the strength of Lady Alyss and her stubborn personality.  She is defiant and brave, and has the ability to fight like a man. Due to the turbulent times, they end up side by side in many battles trying to keep the castle from being overrun.  In the end they realize that without love, neither land nor freedom matter.

The story is action packed and full of love, deceit, and treachery.  There are quite a few twists to the tale which make for a fun read. However, there are also a lot of unrealistic details that emerge.  The characters are often getting hurt, stabbed, and beaten, but they are healed in a day and are able to fight another battle. Although this story is romantic, it is unbelievable, and after a while these incredible feats become a bit tiresome.  It would be better to have the characters, and their physical limits, be a bit more believable as they attempt to fight off the enemy.

I think this is an enjoyable and easy read.  It is light and entertaining.

About the Author:  Award winning author Barbara Bettis is a former journalist and a college teacher of both English and Journalism.  She lives in Missouri where she edits and creates her own tales of fantasy. She is the author of 5 romance novels.

One thought on “Review: For This Knight Only by Barbara Bettis”