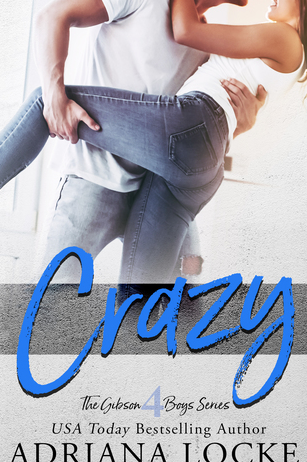 Peck Ward, the sweet, small-town mechanic, isn’t sure it’s for everyone. Least of all him. His life is chaotic enough without adding the pressure of a relationship. Besides, unrequited love is a real thing and he’s kind of over it.
This works out perfectly until a certain someone throws a wrench—pun intended—into his plans. As they go from adversaries to friends to possibly something more, things get complicated. After all, they know how this story ends. It’s not with them together.
His easy grin is enough to win her over. Her unabashed personality does him in. But are they ready to accept the fact that sometimes you don’t find love where you’re looking for it? Sometimes you find it in the most unexpected, craziest places.

I’ve been eagerly and impatiently waiting for Peck’s story since the beginning of the Gibson Boys series. In each of the previous books in this series, you just knew something hilarious and worthwhile would be coming when his character entered the story. From family fights over who would possess Nana’s cheeseball to off road mudding, it’s never boring when Peck arrives. So, I was curious as to who the girl would be that would be the perfect match to Peck’s craziness. Dylan had just the right amount of spunk and sweetness to be the perfect match to Peck’s wildness. The story started off with a crazy misunderstanding and Dylan’s feistiness caught Peck’s attention and held it. It was fun to see the sparks fly between the two as Dylan’s stubbornness mixes up with Peck’s persistent goofiness.

I was pleasantly surprised to see the softer side of Peck’s personality revealed in this book. Peck has been hurt by the ones he’s trusted most in his life. I’ve been intrigued by his stalwart support of the much hated Molly McCarter and the strain it put on his and Dylan’s relationship. It’s an unusual dynamic not often found in romances and I felt it added a touch of realism to the plot. Both had issues with trust and it was lovely to see them work through it and get their deserved happy ending. Of course, the addition of previous characters from the series, Machlan, Walker, Sienna and especially Nana is a bonus as well. I’m hoping that we will continue to see some of these characters- I’d love to see Navie, Vincent and surprisingly, Molly, get their own stories as well. I’ve rated this review with four stars only because there were some distracting editing and grammatical errors that forced me to re-read some of the lines.