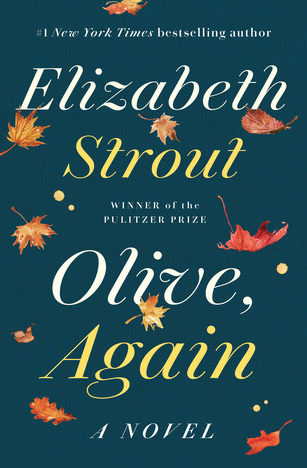 As the townspeople grapple with their problems, mild and dire, Olive is brought to a deeper understanding of herself and her life – sometimes painfully, but always with ruthless honesty.  The unforgettable Olive will continue to startle, to move, and to inspire moments of transcendent grace.

In Olive, Again, author Elizabeth Strout gives her readers more of the churlish, judgmental and highly disliked Olive Kitteridge.  As with the first book, the story is told through interwoven short stories.  In this second book, Olive is featured prominently in most of the stories (whereas there were many stories in the first book in which she only had a cameo appearance).
Age and loneliness have softened Olive a little bit.  While outwardly brutally honest and outspoken, readers have insight to Olive’s vulnerabilities through her inner dialogue. There were times I felt her sadness and regret deeply—especially as it related to her estranged son and grandchildren. Olive has moments of enlightenment, however, she believes a change will not beget the reward she desires at this point in her life.

<i>“…she just sat I her chair and watched her birds at the feeder outside her window and thought that she was not unhappy.”</i>

For all her claims of being blue collar and “salt-of-the-Earth”, Olive is, in fact, quite the snob.  On one hand she claims to be an extreme liberal, and on the other hand she has no tolerance and is quite judgmental of anyone who she considers pedestrian or “wrong” (e.g., anyone who doesn’t share her views).  The dichotomy of how misunderstood she feels and how disparaging she is of others makes Olive Kitteridge a conundrum.  Do I empathize with her?  Do I hold her in contempt?  The answer is a little of both.  As with most people, Olive has muddled through life the best she can. Sometimes she is curt and brusque, and at times she displays compassion (in a stoic, Mainer way).  Her mistakes have cost her dearly in terms of a son who cannot forgive her for her imperfections.  That painful penance is balanced by several encounters with former students who clearly were positively influenced by their high school math teacher.

A creatively told tale about human frailty and misgivings, about love, longing and regret, Olive, Again is a bit more melancholy and introspective than the first book.  With the exception of the author’s inclusion of her political views, Olive Again would have been the perfect sequel to the story of the highly opinionated and bluntly honest Olive Kitteridge.