A hate that spans generations.

A brutal fight over who owns the land, who controls the water, and who can destroy the most lives.

A love doomed from its very beginning.

When Alex Sinclair first spots JoJo Wallace on the shores of his favorite lake, he doesn’t know about his family’s sordid past and how it weaves in and out of the Wallace line.

He doesn’t know that she’s the girl who will own his heart completely. And he can’t imagine the torture he’ll be forced to put her through and the poison he’ll unleash.

She’s a spitfire soul with wild auburn hair—a girl that will haunt his dreams and rule his future. He’ll do unspeakable things, and the consequences will have the power to end a century-long feud.

But JoJo was born just a little different than the other Wallace men and women. She was born to love big and see all that’s good—the good in Alex. And when she comes back to take what’s hers in the wake of Alex’s father’s death, she’s no longer the innocent, naïve girl the Sinclairs have long underestimated. She’s a fighter.

And she isn’t leaving until she ends it all—for good.

* The Feud Series is an adult/coming-of-age, enemies-to-lovers romance and contains mature themes not suitable for readers under 18* 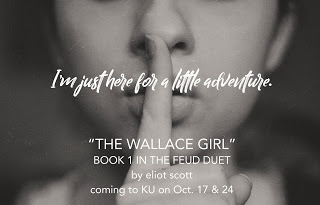 Eliot Scott delivers characters to care about. I loved Jojo Wallace and Alex Sinclair as sweet and innocent tweens. Their naïvete was equally adorable and fear inspiring. You want to wallow in their puppy love, but you know that something evil their way comes. That evil takes the form of the alleged Wallace-Sinclair feud.

The story is told in dual POV, and it is told in dual timelines. When Jojo Wallace returns to her hometown of Tacoma, Washington, she is on a mission to draw out Alex in an attempt to bring him back from the “darkside”. As they dance around their romantic angst, Alex and Jojo relive/remember their innocent meeting that led to friendship, romantic love, and a soul-crushing break-up.

Patriarch Michael Sinclair is the ultimate nefarious antagonist. He is vengeful, despicable and heinous. His myopic focus on his feud is like a malignant growth on his brain that creates justification for his monstrous behavior. Even though he has just been laid to rest, this diabolical character creates the most delicious melodrama!

I, for one, am hooked on this story! The Wallace Girl provides great set-up for a truly epic second half. Good thing there is little more than a week until the next, and final, installment of this series. 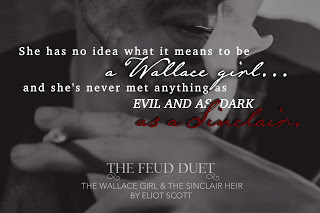 You can pre-order The Sinclair Heir, book 2 in The Feud Duet, now for Apple and Nook. This book will only be available on Apple and Nook during pre-order.

About the Authors: Eliot Scott is the writing duo of bestselling authors Anne MacFarlane-Eliot and Ginger Scott)

Promotional materials courtesy of the authors and Wordsmith Publicity

One thought on “Review: The Wallace Girl by Eliot Scott”