Set during the splendid summer days of 1960s Martha’s Vineyard, this page-turning debut novel pulls back the curtain on one mysterious and wealthy family as seen through the eyes of their nanny—a college student who, while falling in love on the elegant island, is also forced to reckon with the dark underbelly of privilege.

In 1962, coed Heddy Winsome leaves her hardscrabble Irish Brooklyn neighborhood behind and ferries to glamorous Martha’s Vineyard to nanny for one of the wealthiest families on the island. But as she grows enamored with the alluring and seemingly perfect young couple and chases after their two mischievous children, Heddy discovers that her academic scholarship at Wellesley has been revoked, putting her entire future at risk.

Determined to find her place in the couple’s wealthy social circles, Heddy nurtures a romance with the hip surfer down the beach while wondering if the better man for her might be a quiet, studious college boy instead. But no one she meets on the summer island—socialite, starlet, or housekeeper—is as picture-perfect as they seem, and she quickly learns that the right last name and a house in a tony zip-code may guarantee privilege, but that rarely equals happiness.

Brooke Lea Foster’s Summer Darlings is a trip down memory lane for baby boomers.  This historical fiction is set in 1962, and it has all the trappings of that decade of change.

Heddy’s backstory is sad, and it could be very easy to see her as sympathetic.  However, when she chose the more glamorous summer job with the hopes of introduction to better society/connections or even a high-society suitor, I knew trouble was brewing.  I found her efforts to fit in as an equal instead of quietly accepting her role as the summer babysitter uncomfortable.    With every new insight into this character, she seemed more and more of a schemer.

But Heddy has nothing on the wealthy summer inhabitants of Martha’s Vineyard.  Apparently, with privilege comes secrets, scandals and an incredible amount of gossip.  It’s all about appearances, dahlings.

I didn’t find any of the characters likable, but they were all intriguing.  Between trying too hard and making one bad choice after another, Heddy’s coming-of-age story is very entertaining.  It wasn’t the fairytale ending she had hoped for, but she probably learned more about people that summer than she did in her years at university.

The plot is a bit slow at the start as the characters are introduced and the scene is set, and then the plot is somewhat of a whirlwind at the end.  From zenith to denouement, the plot points become very dramatic.  Overall, it was an entertaining read with great fashion, music and culture references to the 1950s and 1960s.  The story provides a nighttime-TV-drama-like escape filled with rich drama queens and conniving betrayals.

About the Author: Brooke Lea Foster is an award-winning journalist whose work has appeared in The New York Times, The Washington Post, The Boston Globe, People, PARADE, Parents, Psychology Today, Washingtonian,and The Atlantic, among others. 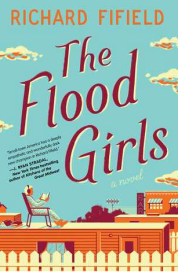