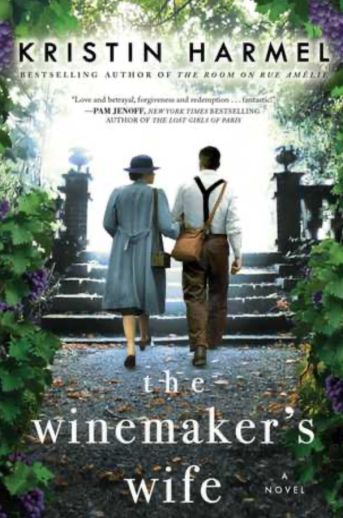 Champagne, 1940: Inès has just married Michel, the owner of storied champagne house Maison Chauveau, when the Germans invade. As the danger mounts, Michel turns his back on his marriage to begin hiding munitions for the Résistance. Inès fears they’ll be exposed, but for Céline, half-Jewish wife of Chauveau’s chef de cave, the risk is even greater—rumors abound of Jews being shipped east to an unspeakable fate.

When Céline recklessly follows her heart in one desperate bid for happiness, and Inès makes a dangerous mistake with a Nazi collaborator, they risk the lives of those they love—and the champagne house that ties them together.

New York, 2019: Liv Kent has just lost everything when her eccentric French grandmother shows up unannounced, insisting on a trip to France. But the older woman has an ulterior motive—and a tragic, decades-old story to share. When past and present finally collide, Liv finds herself on a road to salvation that leads right to the caves of the Maison Chauveau.

One simple-headed, shallow winemaker’s wife makes an unbelievable impact on so many people…a Jewish lawyer, an employee and her daughter, and the French Resistance. She made so many mistakes, but she eventually worked hard to make-up for them. Really, all of the main characters do some good throughout the war, but their personal lives were a mess. Not one of the main characters is wholly good and deserving of the readers’ blind adoration.

I liked the author’s genuine voice and storytelling. The author captured the extremes of the various early views on the war/occupation and the naiveite of many. I loved learning a little about the role of the champagne houses in the resistance.

“Nothing great happens without great risk”

I’m okay with flawed characters, but these are irredeemable. Although I liked the story overall, the adultery and disloyal friends detracted from my enjoyment. The ending is wrapped up a little too neatly.

About the Author: Kristin Harmel is the international bestselling author of THE ROOM ON RUE AMELIE, THE SWEETNESS OF FORGETTING, THE LIFE INTENDED, WHEN WE MEET AGAIN, and several other novels. Her latest, THE WINEMAKER’S WIFE, is coming in August 2019 from Gallery Books/Simon & Schuster. A former reporter for PEOPLE magazine, Kristin has also freelanced for many other publications, including American Baby, Men’s Health, Glamour, Woman’s Day, Travel + Leisure, and more.

Kristin grew up in Peabody, Mass.; Worthington, Ohio; and St. Petersburg, Fla., and she graduated with a degree in journalism (with a minor in Spanish) from the University of Florida. After spending time living in Paris, she now lives in Orlando, Fla., with her husband and young son.